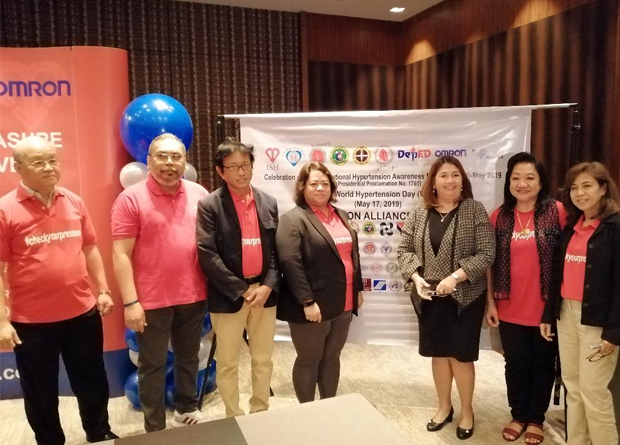 To get rid of the steady growth of hypertension cases in the country, OMRON Healthcare Philippines, together with the Philippine Society of Hypertension (PSH), the Philippines Heart Association (PHA), and other health partners, spearheaded a campaign that encourages Filipinos to monitor their blood pressure (BP) at home to promote hypertension prevention, detection and control.

High blood pressure is the leading cause of death in the Philippines. It is estimated that around 120,000 Filipinos are dying annually, directly or indirectly, due to hypertension-related complications such as stroke, heart attack and other cardiovascular diseases.

Likewise, the number of hypertensive Filipinos continues to increase as many of them are unaware that they have high blood pressure. There are no symptoms and some people only find out they have hypertension after they suffer a stroke or heart attack.

To get rid of the steady growth of hypertension cases in the country, OMRON Healthcare Philippines, together with the Philippine Society of Hypertension (PSH), the Philippines Heart Association (PHA), and other health partners, spearheaded a campaign that encourages Filipinos to monitor their blood pressure (BP) at home to promote hypertension prevention, detection and control.

An effective way to detect hypertension is through daily self-monitoring of BP at home. This is recommended to obtain reliable BP readings as monitoring is taken within the comfort of one’s home, helping patients feel more relaxed as they are surrounded by familiar environment. Home blood pressure levels considered normal are 130mmHg systolic BP and 80mmHg diastolic BP.

Home BP monitoring can easily be adopted and practiced by anyone, whether living in urban or rural areas and belonging to any age groups. Performing regular BP monitoring is actually a cost-effective solution in the long-run compared with frequent visits to the doctor or hospital.

Monitoring BP at home is encouraged to have a better understanding of a patient’s BP pattern, providing a chance of achieving BP control and reduce occurrence of hypertension-related complications.

The International Society of Hypertension (ISH), meanwhile, stresses the importance of regular screening to prevent complications caused by hypertension. To further this cause, ISH launched the May Measurement Month (MMM) initiative.

An annual global screening campaign, the MMM aims to raise awareness about risks and issues brought about by hypertension. Locally, the MMM is in line with Presidential Proclamation 1761 which was enacted on May 1, 2009 by then President Gloria Macapagal-Arroyo and declared the month of May of each year as Hypertension Awareness Month.

In the Philippines, the PSH leads the rollout of the campaign. The Philippines ranked first in terms of total screened individuals when the MMM was launched in May 2017, having a total 272,000 individuals screened or 22% of the global pooled data of 1.2-million for the same year.

“We aim to increase BP awareness to 80%, treatment rate to 60% and a control rate of 30% by 2022. At such rates, we are optimistic that we can reduce BP-related deaths by 25% and save about 30,000 Filipinos yearly. Through campaigns such as the May Measurement Month, we can further raise awareness about the importance of BP screening and other methods such as home BP monitoring, which are vital to averting hypertension complications,” notes Dr. Leilani B. Mercado-Asis, president of PSH.