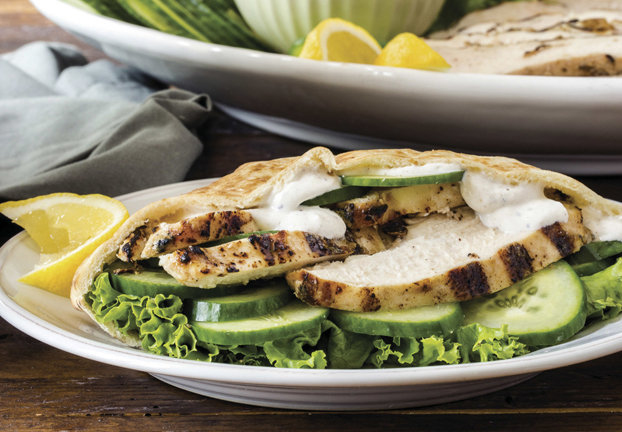 Exotic flavors common in the Middle Eastern region of the world like harissa, za’atar and shawarma are having a moment, appearing on restaurant menus and in popular make-at-home recipes.

Now is the perfect time to give these flavors a try. Thanks to new global seasonings from McCormick Gourmet, the spice combinations are already blended for the ultimate taste and simplicity.

Made from high-quality herbs and spices, the seasonings are USDA-Organic certified and Non-GMO Project verified so you can feel good about the ingredients used in your cooking. The expertly blended spices help create distinctive global-inspired dishes that take your home dining experience to the next level so you can explore these flavors from around the world without leaving the comfort of home.

Look for these flavors as well as new Peruvian and Berbere seasonings in the spice section of retailers nationwide.

Remove chicken from marinade. Discard remaining marinade. Grill or saute 6-8 minutes per side, or until cooked through and internal temperature reaches 165 F, brushing with reserved marinade.

Arrange arugula on serving platter. Drizzle with remaining dressing and top with carrot mixture. Sprinkle with feta before serving.

Drizzle with olive oil and sprinkle with remaining seasoning.

The benefit of dietary fiber isn’t just the easier pooping that advertisers tout. Fermentable fiber — dietary carbohydrates that the human gut cannot process on its own but some bacteria can digest — is also an essential source of nutrients that your gut microbes need to stay healthy. 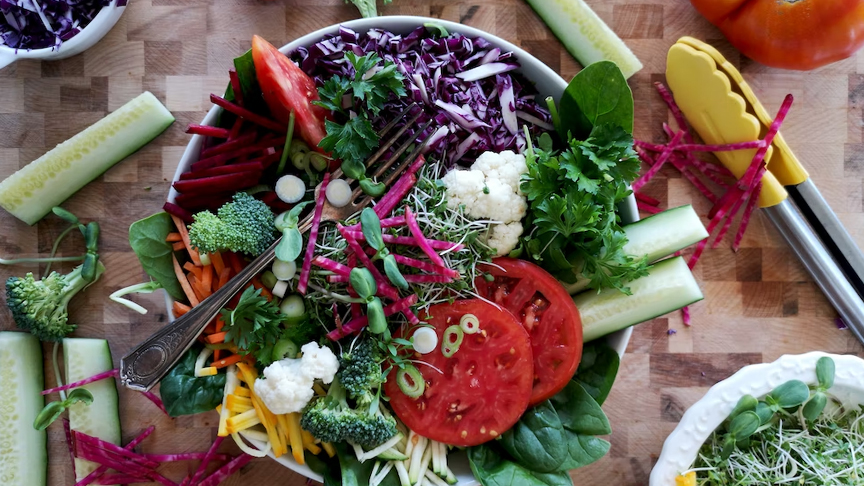 Photo by Nadine Primeau from Unsplash.com

That huge array of dietary fiber supplements in the drugstore or grocery aisle can be overwhelming to a consumer. They make all sorts of health claims too, not being subject to FDA review and approval. So how do you know which supplement works and would be best for you?

A rigorous examination of the gut microbes of study participants who were fed three different kinds of supplements in different sequences concludes that people who had been eating the least amount of fiber before the study showed the greatest benefit from supplements, regardless of which ones they consumed.

“The people who responded the best had been eating the least fiber to start with,” said study leader Lawrence David, an associate professor of molecular genetics and microbiology at Duke University.

The benefit of dietary fiber isn’t just the easier pooping that advertisers tout. Fermentable fiber — dietary carbohydrates that the human gut cannot process on its own but some bacteria can digest — is also an essential source of nutrients that your gut microbes need to stay healthy.

“We’ve evolved to depend on nutrients that our microbiomes produce for us,” said Zack Holmes, former PhD student in the David lab and co-author on two new papers about fiber. “But with recent shifts in diet away from fiber-rich foods, we’ve stopped feeding our microbes what they need.”

When your gut bugs are happily munching on a high-fiber diet, they produce more of the short-chain fatty acids that protect you from diseases of the gut, colorectal cancers and even obesity. And in particular, they produce more of a fatty acid called butyrate, which is fuel for your intestinal cells themselves. Butyrate has been shown to improve the gut’s resistance to pathogens, lower inflammation and create happier, healthier cells lining the host’s intestines.

Given the variety of supplements available, David’s research team wanted to know whether it may be necessary to ‘personalize’ fiber supplements to different people, since different fermentable fibers have been shown to have different effects on short-chain fatty acid production from one individual to the next.

“We didn’t see a lot of difference between the fiber supplements we tested. Rather, they looked interchangeable,” David said during a tour of his sparkling new lab in the MSRB III building, which includes a special “science toilet” for collecting samples and an array of eight “artificial gut” fermenters for growing happy gut microbes outside a body.

“Regardless of which of the test supplements you pick, it seems your microbiome will thank you with more butyrate,” David said.

The average American adult only consumes 20 to 40 percent of the daily recommended amount of fiber, which is believed to be a root cause behind a lot of our common health maladies, including obesity, cardiovascular disease, digestive disorders and colon cancer. Instead of having to go totally vegetarian or consume pounds of kale daily, convenient fiber supplements have been created that can increase the production of short-chain fatty acids.

The Duke experiments tested three main kinds of fermentable fiber supplements: inulin, dextrin (Benefiber), and galactooligosaccharides (GOS) marketed as Bimuno. The 28 participants were separated into groups and given each of the three supplements for one week in different orders, with a week off between supplements to allow participants’ guts to return to a baseline state.

Participants who had been consuming the most fiber beforehand showed the least change in their microbiomes, and the type of supplement really didn’t matter, probably because they were already hosting a more optimal population of gut bugs, David said.

Conversely, participants who had been consuming the least fiber saw the greatest increase in butyrate with the supplements, regardless of which one was being consumed.

In a second study the David lab performed with support from the U.S. Office of Naval Research, they found that gut microbes responded to a new addition of fiber within a day, dramatically altering the populations of bugs present in the gut and changing which of their genes they were using to digest food.

Using their artificial gut fermenters, the researchers found the gut microbes were primed by the first dose to consume fiber, and digested it quickly on the second dose.

“These findings are encouraging,” said graduate student Jeffrey Letourneau, lead author of the second study. “If you’re a low fiber consumer, it’s probably not worth it to stress so much about which kind of fiber to add. It’s just important that you find something that works for you in a sustainable way.”

“It doesn’t need to be a supplement either,” Holmes added. “It can just be a fiber-rich food. Folks who were already eating a lot of fiber, which comes from plants like beans, leafy greens, and citrus, already had very healthy microbiomes.”

In addition to its distinctly sweet flavor, consider these reasons to add Maine lobster to your menu this summer. 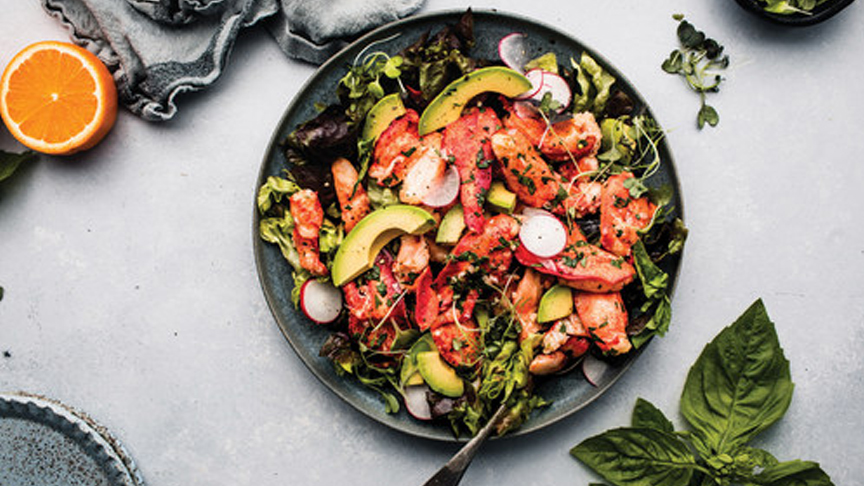 The arrival of summer means favorites like fresh seafood are back on the menu for many families. This year, as you explore new and inventive ways to add variety to weeknight dinners and backyard barbecues, consider including lobster as a versatile, indulgent ingredient.

Throughout the summer months, lobstermen up and down the Maine coast set off before dawn in pursuit of one of the most beloved crustaceans in the world. As one of the oldest fisheries in the country, the industry boasts a rich history with an unparalleled commitment to sustainability and environmental stewardship that has allowed it to thrive for generations.

In addition to its distinctly sweet flavor, consider these reasons to add Maine lobster to your menu this summer:

To help protect the lobster population and the livelihood of those in the fishery, the lobstermen pioneered sustainability and traceability practices before it was fashionable. The sustainability measures developed and adapted over generations, such as protecting egg-bearing females and releasing juvenile lobsters, have preserved the fishery and produced abundant lobster stocks.

Unlike many commercial fisheries, the Maine Lobster industry consists of more than 5,000 independent lobstermen who own and operate small day boats. Many lobstermen are from multi-generational lobstering families, which, along with a mandatory apprenticeship program, ensure its continued survival.

Mother Nature and science guide the fishery, meaning ongoing collaboration between scientists and fishermen to research the health of the lobster population and adapt to the effects of climate change to help protect the oceans.

Sustainability for the industry means taking care of the larger marine environment and the species that rely on it. Since the 1990s, Maine lobstermen have taken proactive steps to protect endangered North Atlantic right whales by eliminating surface float rope, incorporating weak links to allow whales to break free in the event they encounter gear and marking rope to ensure traceability.

The lobster industry goes well beyond the fishermen on the water; including the dealers, processors, restaurant owners, trap and boat builders and more. The fishery is part of the identity of Maine, which means enjoying lobster rolls, grilled tails or steamed lobsters this summer directly supports the community and the lobstermen who call it home.

To find more ways to support the industry and recipes to enjoy this summer, visit lobsterfrommaine.com.

Add lobster to bowl; toss to coat. Chill at least 1 hour, or up to one day.

Garnish with chives and serve.

Eat and live better with products that make healthy living a lifestyle. 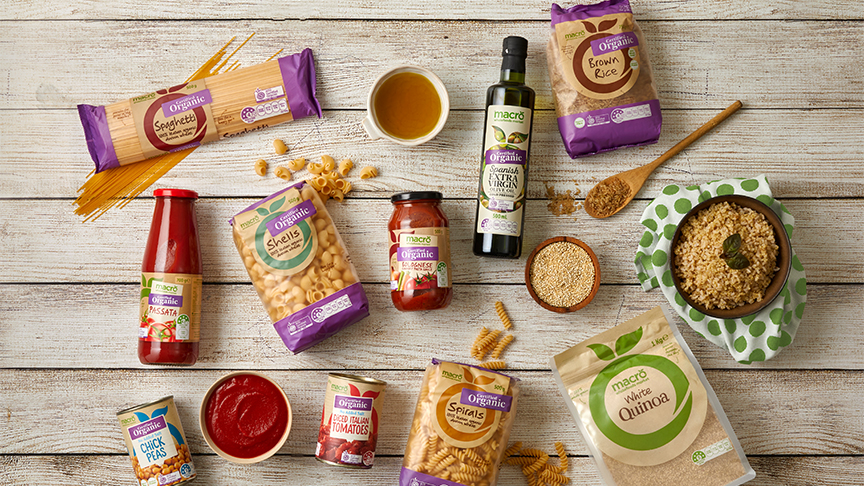 In the past, many Filipinos put wellbeing and wellness on the back burner until major health concerns arose. But since the pandemic began, health has been thrust into the forefront, taking on a new importance for many.

Now more than ever, individuals are finding ways to live healthier lifestyles. Whether that means taking precautions against getting sick, eating wholesome and nutritious food, or managing a healthy weight.

A quick Google search about healthy living and dieting will result in a ton of information that it can be hard to know what is accurate. Be wary of fad diets all over social media that promise quick and easy results. The truth is these quick fixes don’t work. What does work is a lifestyle change. It’s more sustainable too. Here are a few tips to make a healthy change to one’s lifestyle.

Not all snacks are bad. Go for snacks that include protein, fiber, and healthy fats. Good snacks also help curb sugar cravings. In fact, snacking is beneficial when increasing intake of nutrient-rich foods for a burst of energy. Snacks that are good to have on hand are those that will keep the stomach full throughout the day. Consider the Macro Fruit Free Muesli Bar and Classic Fruit & Nut Muesli Bar for great sources of fiber.

Whole foods are those that have not been overly processed. They have many benefits because they are loaded with vitamins, minerals, and nutrients that help keep the immune system and body strong. Try products that can be used in more ways than one such as Macro Tomato Garlic & Basil Chunky Pasta Sauce which can be used as a sauce for fish or chicken. Another versatile product is Macro Quick Oats which can be used in baking or to make a classic oatmeal recipe or overnight oats. These products promise more than just great taste, but also healthier alternatives to traditional ingredients.

Stock up on superfoods

Superfoods are those that are rich in antioxidants, good fat, and fiber. Instead of foods that are high in sugar, consider superfoods like Macro Turmeric Latte and Macro Black Chia Seeds. Turmeric helps lower inflammation levels in the body and reduces the risk of health problems. Chia seeds on the other hand are packed with antioxidants and fiber which can help lower high blood pressure and regulate the digestive system.

All Macro products are available in Shopwise, Robinsons Supermarket and The Marketplace Rustans branches nationwide. Woolworths products are also available via the GoCart website.

Down on Vitamin D? It could be the cause of chronic inflammation

Vitamin B6 supplements could reduce anxiety and depression

Vitamin B6 supplements could reduce anxiety and depression

Down on Vitamin D? It could be the cause of chronic inflammation