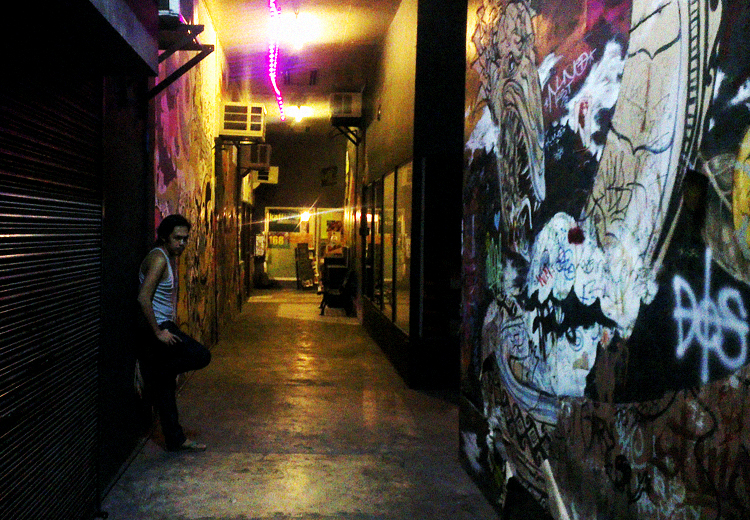 Introducing The Collective, this (somewhat) “underground” venue in Makati City that is worryingly starting to be swallowed by condo developments all around it. Offering venues appealing to various (and not always) mainstream preferences, it’s time to head to this place to check out what it has to offer in case it starts to disappear.

Who was it who said that the only thing permanent in this world is change? Yeah, yeah… you may want to go pilosopo and argue against that point; but it still highlights how – arguably particularly nowadays, with the highlighting of the world’s pre-occupation with quickly-achieved fame and fortune (e.g. look at the fame delivered at the feet of those who made “leaked” sex videos) – humanity’s fickle-mindedness has never been most apparent. Now add to that list of impermanence our pre-occupation with what’s “in” and what’s “out”. And here, we need only go to various parts of the Philippines to see scattered examples.

Think of Torres St. in Davao City, which once hosted a thriving party scene that seemed to go on forever. But after various venues closed, it now makes for an ideal location to shoot a horror movie (think of a ghost town and you’d get the point). Closer to home, there’s the “demise” of Malate in the City of Manila as the (somewhat) bohemian capital of Metro Manila, with the “in” places closing or moving out, so that what’s left are tacky (and sleazy) hanging out venues, or multinational corporation (MNC) junks. And then there was Cubao’s Mogwai, which just… ceased to exist.

What this temporariness highlighted are two (interconnected) key lessons as far as “in” versus “out” venues are concerned. On the one hand, what’s “in” now will not be “in” forever. On the other hand, be sure to head to the “in” places at some point – particularly while they’re still the “most happening” places; and not only because you want to be part of the “in” crowd (though for many this matters), but because you can really only experience a place’s vibe when you drop by while it was at its peak.

That’s a (somewhat) lengthy intro to discuss The Collective – this (somewhat) “underground” venue in Makati City that is (worryingly) starting to be swallowed by condo developments all around it.

The “underground” culture, by the way, continues to be hard to “capture” in the Philippines. Yes, YES, I know that sounds… oxymoronic – after all, it is “underground”, so getting “captured” is not its intention. But, heck, we don’t even have a skate park in the Philippines that we can be proud of (!). It is, therefore, more common seeing skateboarding happening in front of KFC (in Buendia in Makati); or Rajah Sulayman Park (in Manila); or some of SM’s car parks. Often, too, the skateboarders are chased away by security guards (if not the police themselves).

Yes, having a place where one can be “different” is important. And finding such a place is just as important.

In so many ways, The Collective attempts to be such a venue.

The Collective is actually a gathering of venues in one place, so that just about everyone’s preference is readily serviced.

You want to go vegetarian, but know (for a fact) that vegetarianism is NOT cheap? Head to Wabi Sabi.
You are into organic stuff, but don’t know where to start? Head to The Ritual.
You believe that art galleries do not always represent the best, and wonder if there are other galleries where the not-so-popular yet better-than-mainstream-shit are exhibited? Try Kanto Artist Run Space.
Wanna learn a new musical instrument? Lessons are offered Ukulele Philippines.
Wanna satisfy the comics craving? Head to Castle Geek.

And I have not even scratched the surface.

There are restos, bars, fashion stores… you get the point.

I fear that this place may not last for long.
The venue sits on a prime real estate location.
And that condo that was only recently finished beside is already being advertised by (gasp!) Kris Aquino-filled posters that serve as come-ons.

And when it folds, it’s gonna be sad, indeed.
After all, we call can’t just pack our bags to head to Sagada or Puerto Princesa to check the non-mainstream.

But while it’s there, head to The Collective.

You may just find something to tickle your fancy.

And if that “something” celebrates what’s “different” in you, so much the better.