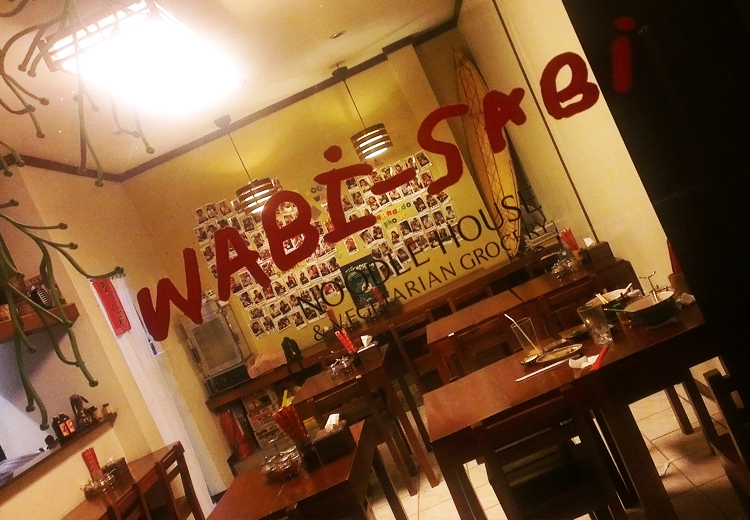 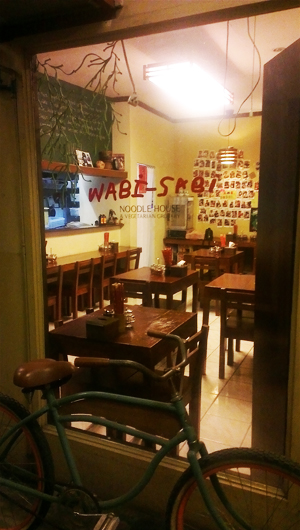 The first time I heard about “this vegetarian place at this corner of The Collective” was from my housemate and his boyfriend. “Blink and you’d miss it,” my housemate said, and then handing me the sandwich he got from the venue for me to try.

The Collective is that, err, “alternative” venue for hanging out located at the very corner of Mayapis and Malugay Street in San Antonio Village, Makati City. To those not in the know (or are just bad with directions, like me), Malugay is parallel to Gil Puyat Ave. (nee Buendia); and The Collective is not that far from the very corner of Gil Puyat and Osmena Highway (a.k.a. South Superhighway), which runs parallel to the riles ng tren (train tracks). Reflective of the decentralization of partying in Metro Manila, this place has become the favorite of the more alternative crowds, from fashionistas to up-and-coming artists to broke/less-moneyed students to hippy expats.

The sandwich I was handed was Bahn My (half: P75; whole: P150), what – initially – looked like some French bread stuffed with a hefty serving of “meat”, slices of tomatoes and some green leaves/veggies. To be had with a specially concocted (secret) sauce, it was actually… tasty, somewhat akin to how I remembered Burger King’s burgers used to taste like, with the tender “meat” emitting juices with every bite.

“That place”, as I ended up referring to it (when my housemate was unable to recall its name) would have been forgotten had it not been for another friend who took me there one evening (they stay open until 11.00PM from Monday to Saturday), ordering for me the sandwich that made me realize this as that somewhat famed venue.

And so started my “real” discovery of Wabi-Sabi Noodle House and Vegetarian Grocery (just call it Wabi-Sabi).

The place can be described in one word: unpretentious. With only seven tables for two (and two additional bar-like seating for four people), it looks more like a more upscale turo-turo (as if there’s such a thing; but you get the point, I hope). Nothing fancy here: no uniformed waitresses waiting on you, no silver chopsticks to speak of, no Chinas in sight, et cetera. This plays with the general notion of vegetarian/vegan dining, i.e. that it remains non-mainstream/non-sosyal – which is fine by me.

The simplicity belies the goodness that can be had in the place, though.

Trying everything in the menu is easy (no printed copy of the menu is available, by the way; everything’s written on the wall, as delis do) since there aren’t a lot of foodies in the list. This is because, as one of the servers said, “everything’s a specialty.”

The house specialties are the noodle soups: Shoyu Ramen (P105), Miso Ramen (P110), and Viet Pho (P95). How popular these are? Well, quite. On one of the restaurant’s walls, there are pictures of people segregated according to their preference among the noodles (i.e. Noodle War: Ramen versus Pho). I’ve tried all three. The first thing to remember is that while these may be named after Japanese (ramen) and Vietnamese (pho) cuisines, they only have a touch of what may be expected from original/traditional preparations. I’d say they have been localized, which isn’t that bad a thing.

Between the two ramens, I prefer Shoyu Ramen, which was – for me – tastier, complete with deceivingly real-tasting faux meat. Not that the Miso Ramen is bad, actually, particularly when added with chili powder. But the Viet Pho is my favorite, largely because it is refreshing (all those fresh greenies stuffed into it), even as it is filling (a bowl’s still a bowl, you know).

These noodles are better appreciated when chowed with either the Thai Milk Tea (P50) or the Lemongrass Tea (P45) – the former almost (just almost) tasting like the milk teas always enjoyable when bought off some vendors in the streets of Bangkok; while the latter more natural tasting than versions offered by other venues in, say, Greenbelt (in Makati City).

Finish the meal with the specialty cakes (flour-less, anyone?), priced from less than P100 (though, if you ask me, other venues offering vegetarian/vegan desserts may be more worth checking out). But for a meal for two costing less that P400 (at least for the two times I visited with different friends with me), I sure am not complaining.

When the chow is done, step out of the place to be engulfed by noise from neighboring bars (and, yes, they can be REALLY noisy, particularly on weekends). But it’s nonetheless good knowing that at a corner, a hushed and hush-hush place like Wabi-Sabi exist.

And my housemate was right: Just don’t blink – and actually look hard – when at The Collective, else you may miss it.