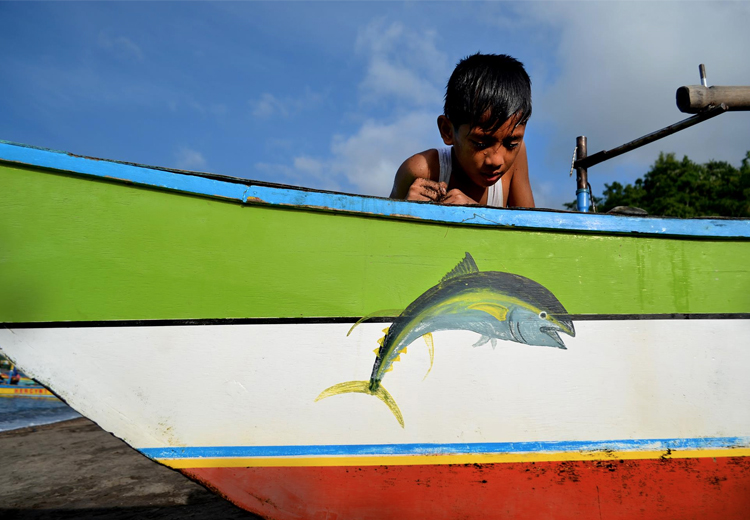 Today, about 52% of the country’s fish exports come from tuna, which buoys the lives and livelihoods of millions of Filipinos. WWF’s Global Oceans Campaign, Sustain Our Seas, builds on decades of work to rekindle the health and productivity of the Earth’s oceans. 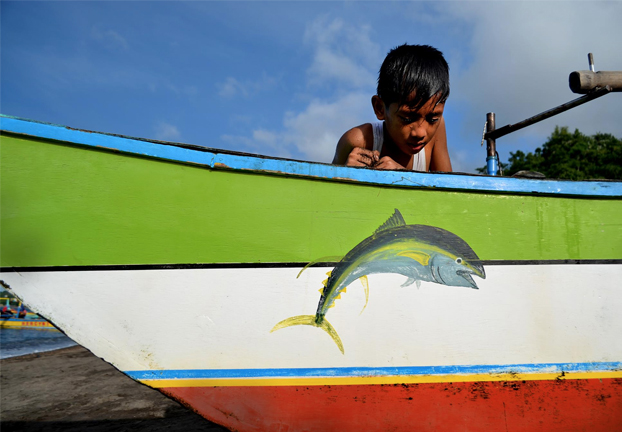 A little boy admires his family boat’s sigil – a jumping Bankulis or Yellowfin Tuna. The boy’s future might very well depend on whether these oceanic giants keep on jumping.
PHOTO COURTESY OF WWF-PHILIPPINES

Late afternoon and we’re holed up in a hut along the coast of Tiwi in Albay, trading fish tales and waiting for fishermen to return. Sitting around us are their wives, mending nets and eyeing the swelling crowd of kids cajoling in the surf. It is June, the season for yellowfin tuna.

The first of the bancas arrive, unloading a decent haul of pundahan or skipjack – small, striped tuna which have proven surprisingly resilient to commercial fishing. Bancas two and three return empty-handed while a fourth disgorges a tub of galunggong or scad. Just one bankulis or yellowfin tuna has been landed, hours earlier. She tipped the scales at 39 kilograms, golden sickle-fins resplendent even in death. We wait until the sun dips into the sea, but no more tuna come.

“The Lagonoy Gulf is the Bicol region’s richest tuna site – but it is heavily overfished,” explains BFAR National Stock Assessment project head Virginia Olaño. “Two decades ago, fishers regularly caught large yellowfin. In 1998, a fisherman landed a 196 kilogram giant, long as a car and fat as a drum. Now yields are waning and yellowfin average just 18 to 35 kilograms – meaning juveniles have replaced adults.”

Though yellowfin tuna are highly-prized, they are far more than mere seafood. Top predators in the marine food chain, they maintain the balance between oceanic predators and prey. “Today the Lagonoy Gulf’s most common fish are anchovies,” warns Olaño. “There aren’t enough predators to eat them – because we’ve eaten most of their predators.”

To stop overfishing and help manage existing tuna stocks in Bicol, the World Wide Fund for Nature (WWF), Bureau of Fisheries and Aquatic Resources (BFAR), plus the Philippine Council for Agriculture and Fisheries (PCAF) convened the first meeting of the Gulf of Lagonoy Tuna Fishers Federation (GLTFF), comprised of the coastal municipalities ringing the Lagonoy Gulf – 3070-square kilometers of sea separating the Bicol mainland from the storm-swept island of Catanduanes. Over 500 people attended Bicol’s first large-scale gathering of fishers, held at the Lagman Auditorium of Bicol University’s Tabaco Campus.

Since 2011, WWF has been working to enhance yellowfin tuna management practices for 5000 fishers in 112 tuna fishing villages around the Lagonoy Gulf and the coast of Occidental Mindoro.

WWF’s Public Private Partnership Programme Towards Sustainable Tuna (PPTST) has since organized tuna fishing associations in all 15 municipalities in the Lagonoy Gulf, plus six LGUs in the Mindoro Strait. It spearheaded the registration and licensing of tuna fishers, vessels and gear to minimize bycatch and illegal fishing, deployed 1000 plastic tuna tags to make the fishery traceable, and completed a series of training sessions on proper tuna handling to ensure that exported tuna continually meet international quality standards.

PPTST harnesses market power and consumer demand to promote sustainably-caught tuna and support low-impact fishing methods like artisanal fishing with hand-line reels – better alternatives to commercial tuna long-lines, which stretch up to 80 kilometers and are rigged with up to 3000 baited hooks.

Today, about 52% of the country’s fish exports come from tuna, which buoys the lives and livelihoods of millions of Filipinos. WWF’s Global Oceans Campaign, Sustain Our Seas, builds on decades of work to rekindle the health and productivity of the Earth’s oceans.

Savoring sashimi, I hope that by working to conserve their shared resource, Lagonoy Gulf’s fishers might someday herald the return of the giant bankulis. Now that fish tale should be worth the wait. 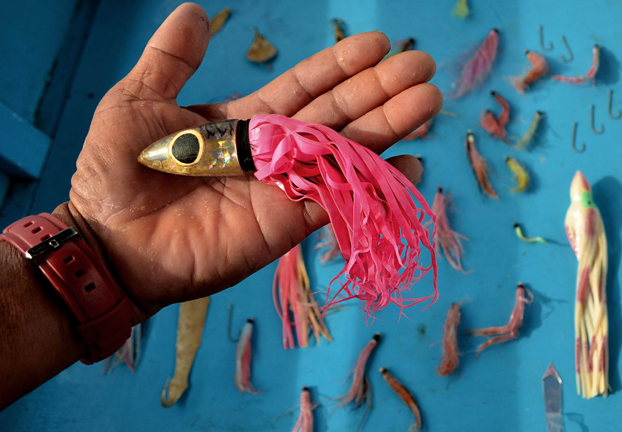 A fisherman shows off a colorful squid lure, used to entice large pelagic predators to bite.
A plethora of makeshift items – from dyed feathers and rubber squid to shredded plastic bags – are used to attract and catch tuna, billfish and mackerel.
Each fisher has his own formula: “I use a combination of rubber squid and shredded plastic lures, but my real secret is squid ink, which I tie-off in tiny plastic bags. As the lure moves, the squid ink squirts out. Fish find this irresistible,” shares Miguel Borres, a grizzled veteran.
Though gear has evolved, many fishers still rely on age-old techniques to collect their quarry.
PHOTO COURTESY OF WWF-PHILIPPINES 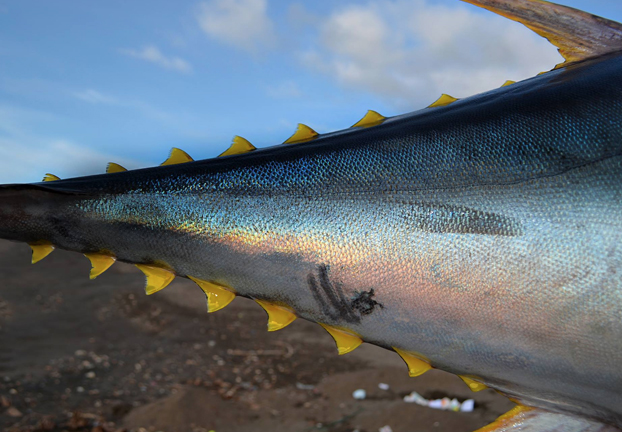 Yellowfin Tuna are so-named because of their canary yellow fins and finlets.
The torpedo-shaped fish have clocked in speeds of 75 kilometers per hour – almost TWICE the speed of the world’s fastest person, Usain Bolt!
PHOTO COURTESY OF WWF-PHILIPPINES 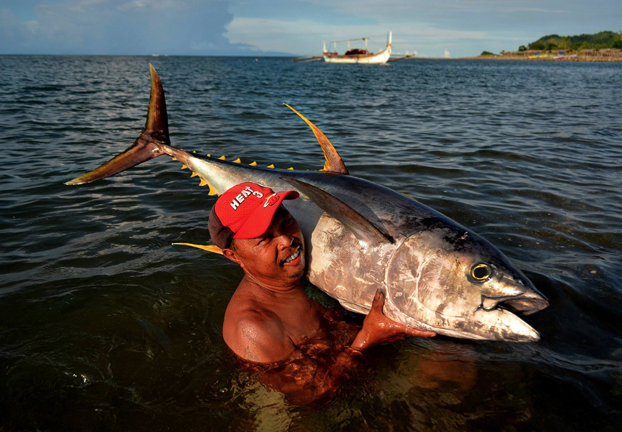 The most sought-after fish in Bicol’s Lagonoy Gulf is the Yellowfin Tuna. A fisher shows off a handsome 39-kilogramme fish.
Two decades ago, fishers caught a 196-kilogramme Yellowfin – the largest caught in the Gulf.
Classified by the International Union for the Conservation of Nature (IUCN) as near threatened, Yellowfin Tuna sport metallic blue backs, golden flanks and a silver belly. Sickle-shaped dorsal and anal fins, hued bright yellow, grant them their name.
They form schools with other tuna species and sometimes with dolphins. While most fish have white flesh, tuna tissue hosts loads of myoglobin, which efficiently oxygenates their systems to give tuna meat a distinctive red hue and mouth-watering texture. This is why they’re so highly sought after.
WWF works to conserve tuna stocks in the Philippines through its Partnership Programme Towards Sustainable Tuna (PPTST) project.
PHOTO COURTESY OF WWF-PHILIPPINES 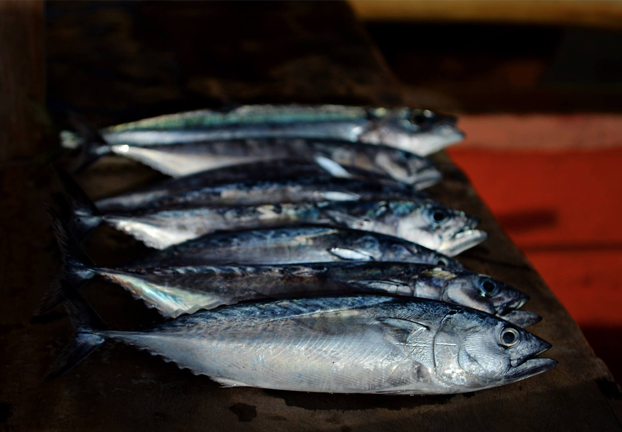 Smaller fish such as scad and mackerel comprise the majority of fishers’ subsistence hauls.
PHOTO COURTESY OF WWF-PHILIPPINES 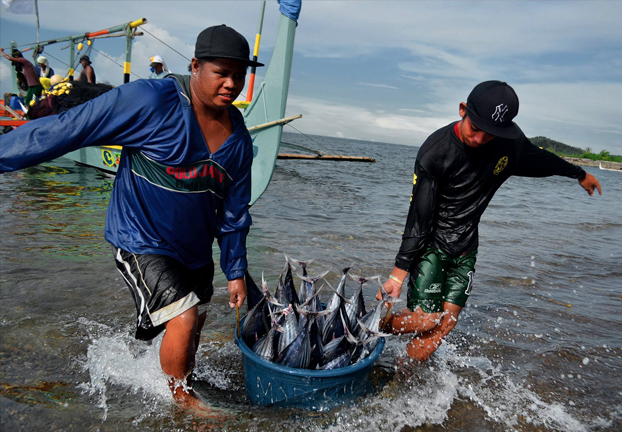 A fisherman rests after unloading his craft’s catch.
Thousands fish under the shadow of Mayon Volcano, whose rich volcanic nutrients fuel blooms of plankton – the essential base of the marine food pyramid.
PHOTO COURTESY OF WWF-PHILIPPINES