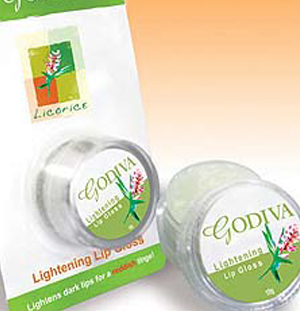 Godiva Lightening Lip Gloss is recommended – and is actually a favorite – among those who want select parts of the body to turn white, or at least pinkish.

The product is predominantly made of licorice (with Vitamin C added to “hurry the lightening process”), a plant native to parts of Europe and China, mainly used as tea and as flavoring. In the early ’90s, Japanese scientists isolated certain compounds in licorice useful for skin care – among these is glabridin, a skin whitening ingredient10 times more powerful than Vitamin C (PMG), 16 times more effective than hydroquinone, and 30 times more active than melawhite and kojic acid.

Godiva Inc. uses purified licorice with the highest glabridin content (40%), so that clinical trials by independent teams of dermatologists (Double-Blind Controlled Clinical Trial of Licorice in Whitening Skin among Filipinos, 1996; and Double-Blind Clinical Trial Comparing the Effect of Purified Licorice to 4% Hydroquinone in the Treatment of Melasma, 2002) showed that there is noticeable skin lightening in as early as seven days in 55% of the Filipino subjects, compared with the three to four weeks of other skin whiteners.

Godiva Lightening Lip Gloss is recommended – and is actually a favorite – among smokers, whose lips darken because of the cigarettes; and among new mothers, whose nipples darkened after childbirth or while breastfeeding.  It remains the company’s bestseller among its whitening products.