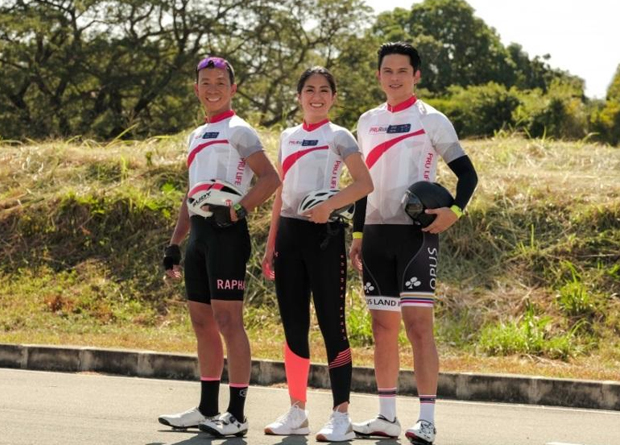 These three are no stranger to cycling as Ho and Legaspi previously joined PRURide PH, while kuya Kim has completed triathlons here and abroad. While they may practice different disciplines, all three share a passion for cycling, health and fitness.

Legaspi is an avid cyclist who discovered the sport after developing knee problems from playing tennis. He now enjoys the adrenaline of getting on a bike and has competed and placed in several cycling races.

He considers his years of experience in cycling and non-stop practice as an advantage. “My experience is my training. Even if there’s no race, I never stop preparing. It’s back to zero if you stop, even for just one month,” he cautions. He also adds that cycling begins with knowing one’s self and testing one’s limits in distance, speed, and elevation.

A collegiate volleyball star, Ho was inspired to cycle after seeing Filipino-American world tour cyclist Coryn Rivera win the 2017 Prudential RideLondon Classique in the United Kingdom. She intensified her conditioning and strengthening routines to conquer PRURide PH which she treats as a new adventure.

“Don’t be afraid to ride. Take it step by step since it’s all about conquering your fear,” she encourages. “Enjoy the process because riding a bike is a liberating feeling. Slowly but surely, you’ll get to where you want to be.”

Atienza committed to different sports including cycling after having a stroke in 2010. Today, he competes as a triathlete and, like Legaspi, finds it easier to race with constant preparation. He says that the more seat time a rider puts in, the easier to finish long distance races.

“Long warm-ups are important at my age. It’s been helpful because I like longer distances. The young ones are fast, but they get tired easily. When I’ve warmed up I beat them.” He reveals that good, quality gear is just as important, but that the most crucial thing is to get on any bike. “Ride within your means; it doesn’t have to be expensive. The important thing is you just have to bike.”

All three will cycle at the Gran Fondo, a non-competitive race in 30-, 60-, and 100-kilometer rides in Subic. They will likewise grace the two weekends of PRURide PH 2019, which will see professionals, beginners, and enthusiasts from across Asia participating in cycling categories of different expertise levels.

Apart from the Gran Fondo, PRURide PH 2019 will have the City Criterium and the Small Wheels Challenge on April 7 in Filinvest, Alabang. Meanwhile, the Philippine Strider Cup will kick off on May 25, and the Masters Race on May 26 at Subic Freeport Zone. Virtual Race will hold succeeding preliminaries from March 29-31, April 27-29, and May 10-12, and will conclude on May 25, also in Subic. There are also community bike rides for families and friends throughout the festival.

Catch our celebrity cyclists in action at PRURide PH 2019! Register now and learn more about the event at www.pruride.ph.