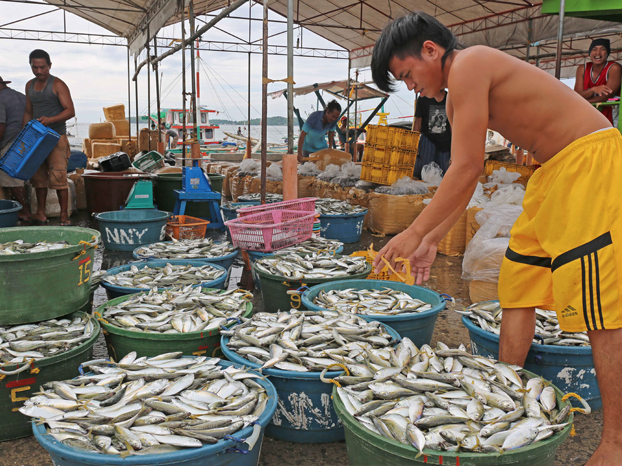 Governors and mayors from the Visayas committed to protect and restore the Visayan Sea, one of the richest fishing grounds in the Philippines, from illegal commercial and destructive fishing.

Share
Tweet
Share
Share
Email
Comments
Governors and mayors from the Visayas committed to protect and restore the Visayan Sea, one of the richest fishing grounds in the Philippines, from illegal commercial and destructive fishing.

“Our goal is to be food sufficient, and later on, to be a food exporting country. We have to protect and develop our marine resources, especially for food security, to feed millions of people. This is a challenge, but we can do it. If we do our job together, with strong partnership with local government units, we can achieve more,” Gongona said during the governor’s meeting in Sicogon Island in Carles, Iloilo last 22 July.

Bounded by the provinces of Iloilo, Negros Occidental, Cebu and Masbate, the Visayan Sea is one of the country’s richest fishing grounds, hosting a variety of high-value species such as tuna, herring, mackerel, blue swimming crab and sardines. However, scientists reported a steady decline in seafood supply from the 1980s onwards – due mostly to the prevalence of blast fishing, plus the encroachment of trawls, purse seines and ring nets in municipal waters.

BFAR, the local government units and stakeholders will craft a fisheries management framework plan with BFAR committing to declare the Visayan Sea as a Fisheries Managed Area (FMA), probably the first one to be declared as FMA under the provisions of the newly amended Fisheries Code (RA10654)

As an FMA, the Visayan Sea will have a management framework for enforcement activities, establish reference points for major fish species, and convene a science research group for the monitoring of fish stocks.

BFAR also committed to provide a dedicated monitoring control and surveillance (MCS) vessel for the Visayan Sea to strengthen seaborne patrolling and the enforcement of fisheries laws.

“This is very much appreciated because the mere presence of these vessels will act as a strong deterrent to illegal fishing activities in the Visayan Sea,” said Negros Occidental governor Alfredo Marañon.

Iloilo Governor Art Defensor Sr. was joined by several mayors from the Province and called the defenders of Visayan Sea as the Visayan Sea Guardians.

The event was likewise participated by advocates lead by lawyer Tony Oposa who said that the core group composed of BFAR, local government units, and non-government organizations created a 500-day action plan to start seaborne patrols, scientific research and information campaigns in the area.

“We are the center of the center of marine biodiversity on Earth, and the Visayan Sea is our geographical heart. It is the crown jewel of Earth’s natural resources, and a common heritage for humankind,” Oposa said. He also said that that the MCS vessel will help fast-track seaborne patrol and information dissemination on fisheries laws in the area.

Global marine conservation group Oceana emphasized the need for law enforcement in the Visayan Sea, and implement vessel monitoring measures and the banning of active gear such as bottom trawling in municipal waters.

“The Visayan Sea is an important traditional source of fish, not just for the Visayas but for the whole country. It is an ecosystem complete with all major marine habitats – from mangrove forests, seagrass beds, coral reefs to pelagic habitats. It is our shared responsibility to ensure sustainable management of one of our richest fishing grounds,” lawyer Gloria Estenzo Ramos, Vice-President for Oceana Philippines, said.