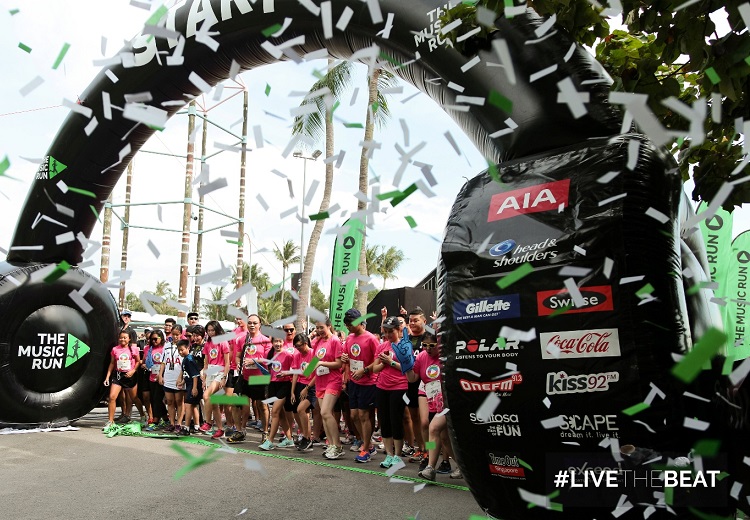 The Music Run by Philam Life, the immersive and interactive fun run that puts music at its heart, will take place at the Philippines Arena on November 14.

The Music Run has been making waves in Asia with sell-out crowds in cities like Kuala Lumpur, Jakarta, Bangkok, Taipei and Yangon, and this is the first time it will be staged in the Philippines.

The event will start with a Pre-Party featuring a mass warm-up session and a live performance by popular Filipino rock band Sponge Cola (presented by Globe)! Music Runners can walk, run, or dance through the interactive 5KM Sound Track and make their way to the After Party featuring local DJ Deuce Manila and DJ GYRO from Australia.

Unlike other marathons and themed running events, The Music Run by Philam Life has no time limit, which means anyone of any fitness level can join in on the fun and complete the run at his or her own pace. It is not about who finishes the race the quickest, but simply who gets to have the most fun.

All Music Runners will be rewarded by Philam Life with an awesome medal at the Finish Line. “We understand that health has become a primary life goal among Filipinos. We want to help them achieve this by encouraging them to embrace a healthier lifestyle and live longer, more active lives, through health campaigns and wellness activities such as The Music Run™,” said Philam Life CEO J. Axel Bromley.

As the Event Promoter of The Music Run across Asia, Executive Director of Exceed Sports & Entertainment Martin Capstick believes that the combination of music and running form a powerful connection with today’s modern generation.

“With the resounding success of The Music Run in the cities we have been to, we are proud to be bringing it to the Philippines for the first time.” He adds, “Music and running have always gone hand in hand in a way that allows fitness buffs and casual runners alike to enjoy running to the rhythm of the beat. With The Music Run, we are excited to build a community of Music Runners whom we put at the heart of this experience by inviting them to decide the songs they want to listen to during the run,” he said.

The Music Run has partnered with Spotify to build a bespoke digital music selection mechanic that crowd-sources the songs for the run. This provides a true social voice to the event. With the tagline Your music, Your beat, Music runners can have a say on the music that will be played during the run by voting for their 5 favorite tracks in each music genre on The Music Run website.

The five most popular tracks from each genre will then be selected to form the music zone playlists for the actual run. “The concept of The Music Run is a natural fit with Spotify – Music is a big part of the running experience and we are very excited to have The Music Run leverage Spotify’s wealth of music data, content and an understanding of listening habits to create playlists for their upcoming run in the Philippines, our fastest-growing market in Asia.” says SunitaKaur, Managing Director, Spotify (Asia).

For runners who like to party like a Rock Star, they can opt for the Rock Star Pack at P1400 and get additional goodies including The Music Run’s Live The Beat cap, cellphone armband, and rave shades.

All Music Runners must pick up their run packs from November 7 to 9, 2015 from 10 AM to 9 PM at Glorietta 5 in Makati City. Manila is just one of 20 cities in 11 new countries experiencing The Music Run for the first time in 2015.

The Music Run is one of the fastest growing fun running events in the world and the Manila leg of this hugely popular series is expected to draw 10,000 fun seekers, runners and music lovers.