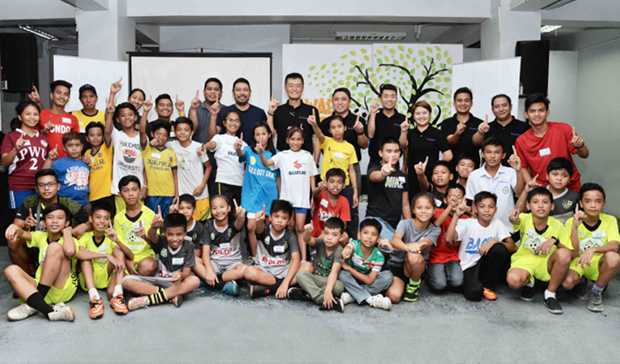 Suzuki Philippines donated more than 900 items consisting of soccer balls, gym bags, T-shirts and rally towels to SipaG members. The turnover ceremony was held last July 5 at the Gawad Kalinga Activity Area, where Suzuki executives and GK representatives joined in handing out the football items to 30 kids aged 12 and below, each one representing GK’s SipaG clubs.
“Suzuki PH is honored to be part of such a heart-warming cause that aims to build up young and aspiring football players. It is important for them to be raised and trained this early, and Gawad Kalinga has given us this wonderful opportunity to be a part of these young children’s lives,” Suzuki Philippines General Manager Shuzo Hoshikura said.
The football division of the SipaG program has more than 14 football clubs nationwide, including those based in Mandaluyong; Smokey Mountain, Manila; Palo, Leyte; and even as far as Davao and Rajah Buayan in Maguindanao. The recipients of the donated items include both existing and new football teams that will open this year in far-flung areas such as Tawi-Tawi, Siargao, North Cotabato, Sultan Kudarat, Butuan and Marawi, where play therapy will be conducted among the kids affected by the war.
The turnover ceremony also included exciting games and prizes for the young ballers, all of whom actively participated. Suzuki executives also joined the games and enjoyed the friendly and competitive atmosphere. Winners were given school supplies such as intermediate pads, pens and pencils in support of the children’s school needs.
Suzuki Philippines Assistant General Manager Cecil Capacete shares, “Suzuki Philippines recognizes the vital role of sports in shaping the lives of young children. We could not be any happier to be supporting such talented young players from Gawad Kalinga’s SipaG program. Gawad Kalinga’s advocacy has truly been to inspire and bring change to the lives of many of our Filipino brothers and sisters. This is why we are deeply moved by this opportunity to join in supporting our young children’s football dreams.”
Last June, the SipaG football kids represented the country in a tournament in France, where they played against other football players aged 12 from teams representing 14 countries. Besides being the first Filipino team to play in Futbol Salou in Spain, they are the first to attend the Hazebrouck Youth International Cup in France and the first and only team from Asia to play in Dirinon.
“The greatest challenge of the Filipino today is really to have the courage to dream big. Sometimes situations deprive us of that. It takes not just one person. It takes a whole community, a team to win and to achieve that dream. We are here to help you, to cheer you on, to remind you that you can do it. You are not alone. We are one with you to guide you. We also have partners like Suzuki who share the same dream. They, too, are working for the dream of the Filipino youth. In about 30 years’ time, you will be the ones shaping this nation. We are here, along with our partners like Suzuki, to help prepare you for that role,” says Gawad Kalinga executive director Luis Oquiñena.
For more information about Gawad Kalinga’s SipaG initiative, please visit http://gawadkalinga.com/sipag.