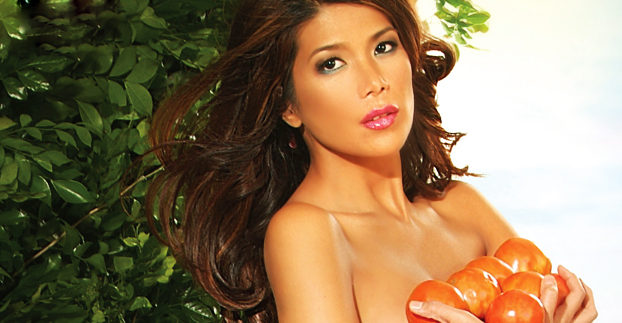 Geneva Cruz: ‘For me, being vegan is not about the diet. It’s really about my love for all creatures.’ 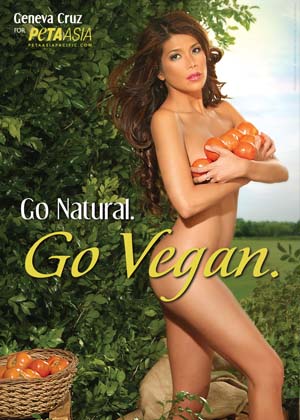 Singer Geneva Cruz stripped down for a new ad for People for the Ethical Treatment of Animals (PETA) Asia. The ad shows Cruz, a longtime vegan, posing in her birthday suit in a vegetable garden while clutching an armful of tomatoes, and the caption reads, “Go Natural. Go Vegan.”

Cruz was just 15 years old when she decided to stop eating animals. Now a staunch vegan, she says, “For me, being vegan is not about the diet. It’s really about my love for all creatures.”

Animals who are raised and killed for food endure immeasurable cruelty and are denied everything that is natural and important to them. On factory farms, cows, pigs, and chickens are kept in crowded, filthy enclosures, which are often so small that the animals are unable to lie down comfortably. Many animals are forced to stand amid their own urine and feces.

Cows are routinely branded, dehorned, and castrated without being given any painkillers. Pigs are castrated, and their tails and teeth are cut or broken off—also without any pain relief. Chickens are drugged and bred to grow so rapidly that they become crippled from supporting the weight of their own massive upper bodies. Birds’ throats are cut while they are still conscious, and many birds are scalded to death in defeathering tanks.

In addition to being cruelty-free, a diet that excludes meat, eggs, and dairy products can lower the risk of heart disease, cancer, strokes, diabetes, obesity, and acne in adults as well as allergies, ear infections, and juvenile-onset diabetes in children. Ninety percent of Filipinos are lactose-intolerant, and avoiding dairy products can help people’s bodies work more efficiently. A healthy vegan diet can also help anyone stay slim.

Cruz says, “In addition to saving countless animals every year, the health benefits of a vegan diet are countless, whereas the consumption of animal-derived foods has been linked to not only heart disease and cancer but also multiple sclerosis and osteoporosis.”

Meat and dairy production also contaminates water and soil with animal waste. Worldwide, farmed animals produce 13 billion metric tons of excrement a year—that’s 48 times as much as the world’s human population produces. Each day, animal agriculture consumes 2.5 trillion liters of water—enough for every person in the world to take eight showers.

Animal grazing has been responsible for loss of topsoil and eventual desertification in many parts of the world. The animals destroy the land’s protective vegetation. Then wind removes the soil and converts formerly productive rangeland into desert. Forest lands in China and South America are being destroyed to clear space for grazing or to grow food for farmed animals.

A recent United Nations report concluded that a global shift toward a vegan diet is necessary to combat the worst effects of climate change.

“Geneva Cruz knows that going vegan is the best and simplest thing that people can do for animals, the environment, and their own health,” says PETA Asia Director Jason Baker.

“Animals are beaten, kicked, and stomped on at factory farms and slaughterhouses”, says Cruz. “Each one of us can fight these abuses by refusing to consume the products of the meat, egg, and dairy industries.”

Where to Satisfy that Vegetarian Sweet Tooth

DKSH Business Unit Healthcare, a leading partner for healthcare companies seeking to grow their business in Asia and beyond, has partnered with LEO Pharma to bring high-quality therapeutic products for dermatology and thrombosis to patients across Asia. 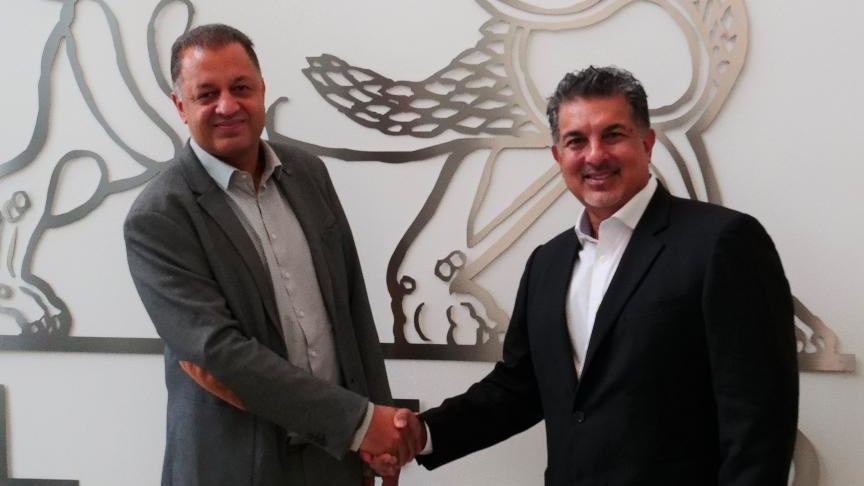 DKSH Business Unit Healthcare, a leading partner for healthcare companies seeking to grow their business in Asia and beyond, has partnered with LEO Pharma to bring high-quality therapeutic products for dermatology and thrombosis to patients across Asia.

Partnering in Hong Kong, Malaysia, Singapore, Taiwan, Thailand, Vietnam, and the Philippines, the two companies seek to solidify brand presence, grow market share, and ultimately improve patient health outcomes in the region. Skin diseases can cause serious physical and social discomfort for millions of patients around the world whereas thrombosis can affect anyone regardless of their age, race, gender, and ethnicity.

DKSH will support LEO Pharma by building dedicated sales and marketing teams on the ground in Asia and managing logistics and product distribution in these markets. The firm’s experienced teams and broad distribution network will ensure LEO Pharma products reach modern trade, traditional trade, hospitals, clinics, and other medical channels, as well as patients in need across the region.

LEO Pharma is a global company dedicated to advancing the standard of care for the benefit of people with skin conditions, their families and society. With decades of research and development to advance the science of dermatology, LEO Pharma now offers a wide range of innovative treatments and therapies for all skin disease severities as well as thrombosis.

Khalid Aouidat, Vice President, responsible for commercial activities in Southeast Asia at LEO Pharma commented: “At LEO Pharma, we are dedicated to changing the standards of care for people with skin diseases by bringing new innovative treatments forward and making them easily accessible. Supporting this ambition, we are delighted to be partnering with DKSH. Their experience and strong regional footprint in Asia, as well as their marketing and sales expertise will help to further strengthen LEO Pharma’s brand and its continued growth.”

Bijay Singh, Head of Business Unit Healthcare at DKSH, said: “We are committed to enriching people’s lives and improving healthcare for all. The partnership with LEO Pharma strengthens our ambition to become the preferred partner for clients to help patients in Asia to have better access to high-quality and innovative products and solutions. While we drive their growth across the region, LEO Pharma can focus on researching and developing products and solutions for people with skin conditions.”

Epson, which has previously supported the development of WWF-Philippines’ virtual museum Museo Kalikasan, is now supporting the Mangrove Restoration Project in the municipalities of Balabac and Bataraza, Southern Palawan. 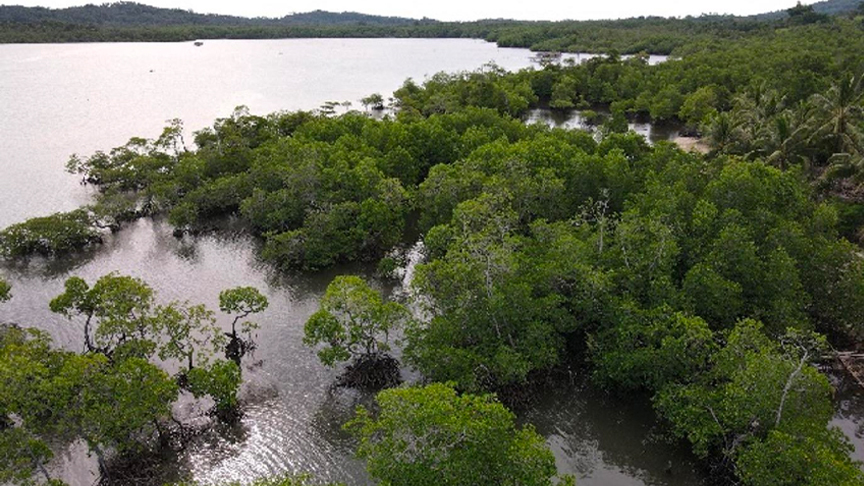 Epson Philippines’ partnership with the World Wide Fund for Nature (WWF) Philippines for marine ecosystem restoration has officially kickstarted with a ceremonial launch in Balabac, Palawan. Supported by project stakeholders such as the European Union delegation to the Philippines and local government officials, the project launch highlights the importance of rehabilitating mangrove sites, recognizing their critical role in marine biodiversity and protecting coasts from erosion and storm surges.

Epson, which has previously supported the development of WWF-Philippines’ virtual museum Museo Kalikasan, is now supporting the Mangrove Restoration Project in the municipalities of Balabac and Bataraza, Southern Palawan. As part of the wider European Union-funded Ocean Governance Project—an initiative focused on strengthening habitat resilience through restoration in the Sulu Sulawesi Seascape that covers the Philippines, Indonesia, Malaysia—the joint mission in Palawan aims to boost local capacity in taking care of the mangroves, as well as address other critical issues such as plastic waste management. With Epson as a key partner, the Mangrove Restoration Project was able to expand beyond Balabac and into the neighboring municipality of Bataraza. In addition, the growing relationship between Epson Philippines and WWF-Philippines only further drives Epson Philippines’ commitment to support sustainable innovations and initiatives to solve the world’s greatest challenges.

“Corporations have a shared responsibility in sustainable development,” said Eduardo Bonoan, Epson Philippines’ General Manager for Marketing Division, who shared his remarks virtually during the project launch. “As Epson continues its commitment to sustainable innovation and environmental responsibility, we believe in forming critical partnerships with organizations that are aligned with our values—such as WWF-Philippines.”

To further the goals of the Mangrove Restoration Project, WWF-Philippines will continue to work with local government and key stakeholders such as Epson Philippines to establish a ‘Community Learning and Innovation Hub’ that aims to bridge knowledge gaps and strengthen coastal communities’ experience in resource management, thereby helping to build local capacity.

“It is important that we continue to protect and manage Balabac’s valued mangrove forests to boost our efforts in keeping a healthy environment and supporting local livelihoods,” said Balabac Mayor Shuiab J. Astami, who officially launched the project in Balabac Island.

“We are excited to be part of this multi-stakeholder effort that will restore critical mangroves in Balabac, Palawan and improve the way their coastal resources are managed for the long haul. We strongly hope that this project will succeed and serve as an example for many other communities,” said Executive Director of WWF-Philippines, Katherine Custodio.

Moving forward, Epson aims to continue setting a more sustainable example for corporations across the region.

“Working alongside governments, local champions and conservation organizations, we are proud to be part of this public-private partnership that is aligned with our renewed Epson 25 Corporate Vision—which aims to enrich communities and help realize a sustainable society,” concludes Bonoan. ”We hope that this opens up a path for more sustainable partnerships in the future.”

SM Supermalls President Steven Tan acknowledges that “People already know about the importance of sustainability. Their question is ‘What can I do?’ SM helps them find a way to make a difference.” 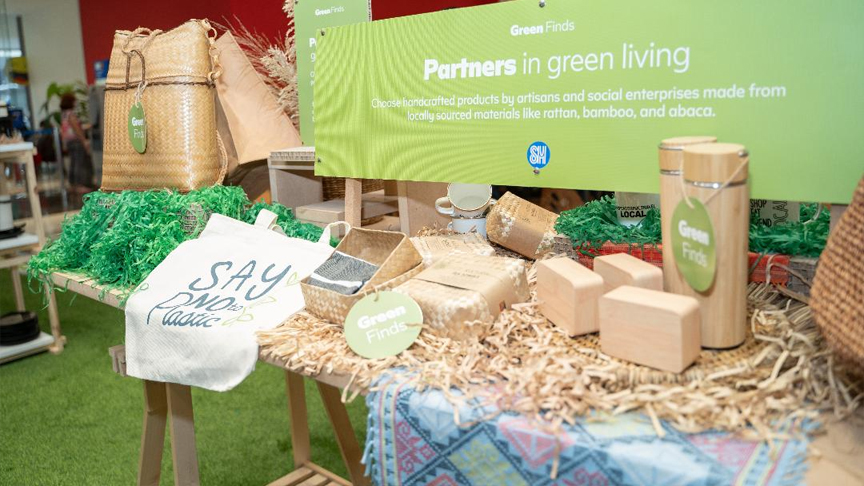 When it comes to challenges as big as climate change, businesses and communities have to work together and consumers need to have concrete, practical options that can allow them to go green in their everyday life.

SM Supermalls President Steven Tan acknowledges that “People already know about the importance of sustainability. Their question is ‘What can I do?’ SM helps them find a way to make a difference.”

SM, the country’s largest retailer, is taking the lead in offering accessible eco-friendly options to their consumers through the recently launched Green Finds. Consumers simply need to spot items and products with a Green Finds badge.

Many products featured in the Green Finds pop-up stores are made by local businesses. This is part of SM’s long-standing commitment to support Filipino small and medium enterprises—driven by its origins as a small shoe store in downtime Manila in 1958.

Today, SM works with almost 25,000 small and medium enterprises representing 27% of the total SMEs in the country. Aside from helping them reach consumers through several retail channels, it also gives free training on sustainability and social and environmental topics through the Green Movement Sustainability School.

SM is also offering multiple channels where consumers can pick out green items: from brick-and-mortar stores to online spaces.

“As the country’s largest shopping platform—with malls nationwide, the ShopSM website and app, and services like Personal Shopper and Click and Collect—we are in a unique position to make it easier for people to spot green finds,” says Cathy Ileto, VP for Corporate Communications, SM Retail.

“Our platforms empower consumers by giving them more choices, which drives the movement towards a green lifestyle.”

The SM Green Finds is part of a comprehensive program called the SM Green Movement, which brings together the customers, suppliers and partners, and communities in a joint effort to help protect the planet.

“The goal of the SM Green Movement is to get everyone involved in the effort to stop global warming and protect the planet,” Tan further stated.

SM has also encouraged customers to use more eco-friendly transportation, through bike lanes and electronic vehicle (EV) charging stations in several of its malls.

The SM Green Movement is a collective effort of SM, its customers, communities, and partners to promote green living, green culture, and a green planet. For more information, visit this website.