For 24% of Filipino men aged 50-59 years old who are suffering from at least moderate symptoms of Benign Prostatic Hyperplasia (BPH) or enlarged prostate causing problem in men, the lack of information about the disease, its symptoms and prostate-related conditions may lead to late diagnosis and continued growth in the number of severe BPH cases in the Philippines.

With the aim of raising awareness about prostate health, healthcare firm GlaxoSmithKline Philippines (GSK) has embarked on a FUN to be WISE on BPH campaign which seeks to educate Filipinos about BPH symptoms so men can consult their doctors and improve their quality of life.

According to Dr. Jay Javier, medical affairs at GSK, through this prostate health awareness advocacy, they can help inform not only men but even women by educating their important men in their lives about BPH and convincing them to go to their doctors to seek advice and treatment when they feel symptoms.

Dr. Marie Carmela Lapitan, emerging medical market for urology at GSK, describes prostate as an organ that wraps around the urethra of men. As men grow old particularly when they reach the age of 40, prostate starts growing and as it encircles the urethra, it tightens it so that the outflow of urine on the bladder becomes weaker or more difficult. This becomes a symptom of BPH.

Although not malignant or cancerous, BPH is a progressive disease, says Lapitan. You can’t stop it as long as the man is aging. Prostate will continue to grow and will eventually cause problems, and as times go by, these problems really get worse. The symptoms get more severe that one of the most common complications of enlarged prostate is that a man will eventually not be able to urinate.

Lapitan also said with the difficulty in urinating, about six percent of patients really need a catheter to urine or for the urine that is being there for a long time will come out. And a good percentage of them will eventually need to undergo surgery as the condition has been so severe causing complications already.

Regarding BPH symptoms, Lapitan noted there is the so-called storage and voiding symptoms which, in general, increase the frequency of having to go to the toilet during the day or even at night or the urgency to run to the toilet the moment they have this feeling to urinate. Voiding symptoms include taking a long time to void; the stream becomes very weak or intermittent; having to strain, start, continue, and empty the bladder, and sometimes having splitting or spraying of urine.

Once a BPH patient is assessed by a doctor, he may undergo medical history, and simple urine test to see whether he has infection or other urological problems that might be causing the symptoms. Doctors may also do IPSS with a scoring system to check all symptoms and look at how severe the patient suffers. They can also recommend the simplest way to check whether a patient has enlarged prostate by inserting a finger into his rectum to feel the prostate.

With GSK’s FUNWISE acronym, which is based on the International Prostate Symptom Score, men can know if they are experiencing symptoms of BPH. 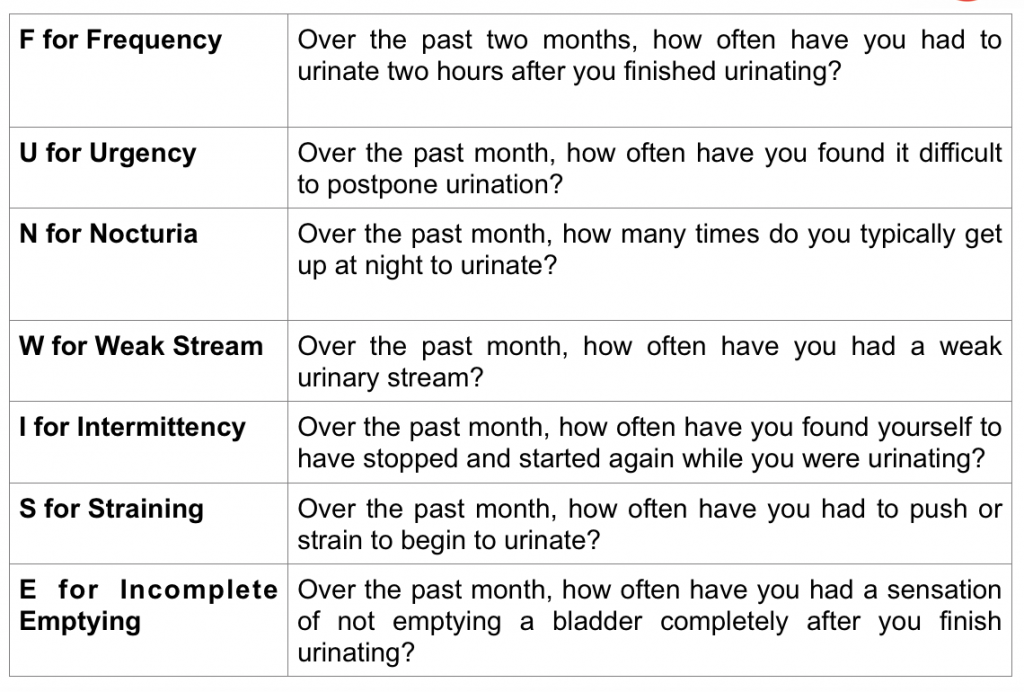 For BPH treatment, Lapitan said medical and surgical treatments to improve symptoms are available in the Philippines. She mentioned there is a medication that relaxes the muscles of the prostate gland so it opens up the urethra for the urine to flow better. There is also a group of drugs that can shrink the prostate so over time the growth of prostate is expected to control or even shrink to prevent surgery in the long run. There is also a drug that can control the bladder so that frequency, urgency, and nocturia will be relieved; and other invasive medications.