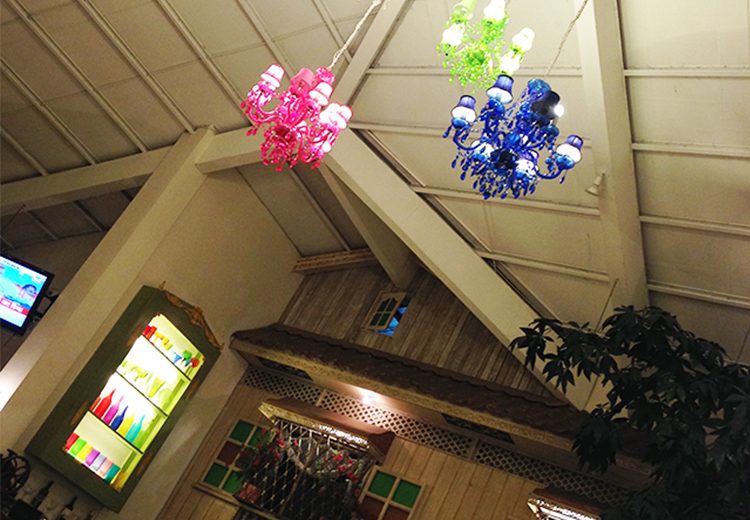 If you’re looking for a COMPLETE Thai experience while in Cagayan de Oro City, Thai Me Up is definitely going to disappoint you. The place has numerous limitations that could greatly affect the overall experience while there. However, if you want to lower your expectations, this place isn’t at all bad. As such, at least for people who like (if not love) everything Thai, this is a good attempt, even if they ought to do better, definitely…

Among Asian food, Thai cuisine is definitely one of the most popular. Those who aren’t familiar with the offerings of Thailand may wonder why; but, let’s be honest here, Thai food is, in a word, DELISH (!).

It is, therefore, a welcome surprise seeing a Thai resto in the middle of Cagayan de Oro City – a place in Northern Mindanao that may not be THAT cosmopolitan (yet), but is at least adventurous gustatory-wise.

And so welcome to Thai Me Up.

The resto actually shares the same space as Fil Me Up. That is, there are actually two areas within the venue – i.e. Thai Me Up, the Thai resto that’s “inside” the building (it’s a giant room in the building); and the Fil Me Up, the Filipino resto that occupies the main hall/dining area of the building, as well as the courtyard.

Talking of the “spaces”, though, I actually prefer Fil Me Up’s. This is because Thai Me Up is actually… plain – you just have wooden tables inside a room that has Buddha statues and, for wallpaper, giant pics of Thailand hostpots. Fil Me Up, on the other hand, has more character – thanks to the antique collection that can be found everywhere, e.g. a kalesa (carriage) in the courtyard, old plaka (vinyl records) placed under glass tabletops, discontinued Singer sewing machines, vintage Coca-Cola glasses, et cetera.

As the photos show, I prefer staying at Fil Me Up because of the place’s overall “feel”…

Fortunately, because Thai Me Up and Fil Me Up are literally under one roof, you can order from the menus of either.

Now, why at least drop by Thai Me Up? First, the place is… cool. Downtown in Cagayan de Oro City, there are numerous karinderyas (small eateries) and fastfood joints (think Jollibee). Now, if you are after a more “formal” place, include this one in your list.

It helps that, second, the place is very, VERY accessible. It is located downtown, and you don’t even need to grab a cab to get there (when you’re downtown) – the jeepneys pass through the road where it’s located, and, better yet, you can just take a leisurely walk downtown, and then find Thai Me Up while you do so.

Third, there’s the food. I wouldn’t say they have the Thai cooking perfected (heck, you can’t beat grabbing chow from street vendors in Bangkok!); but they have… close to what Thai food may taste like (if given that Filipino sweet-ish twist). The Fresh Spring Rolls is more akin to local lumpia, for instance, but… we’re in CDO, so I suppose I have to be more forgiving. The Chicken Pad Thai Noodle is sweet-ish, too, even after you’ve added lots of chili flakes already. Others tried included the Sticky Rice with Mango (at least akin to what was tasted in visits to Phuket) and Spicy Pork Salad (this one suffices…).

Now, I don’t think you can perfectly mimic Thai cooking outside of Thailand – i.e. to achieve this, you’d need the right ingredients, the right chef (if not cook), et cetera, et cetera. I don’t think Thai Me Up has all of these “elements”; as such, what the place has are somewhat weak versions of Thai delicacies. Now, if you’re not THAT picky, this place isn’t all that bad. But if you are, then head elsewhere…

The offerings can be pricy, too (particularly since it’s ‘just’ Cagayan de Oro City). Paying P145 for spring rolls isn’t “normal” for everyone.

And the place – no matter how cutesy it may be – can be problematic, e.g. it was raining the first time I visited, and the entire Fil Me Up area had to be evacuated because the area got flooded. And don’t get me started at the outdoor hubs at the courtyard…

Now, if you’re looking for a COMPLETE Thai experience while in Cagayan de Oro City, Thai Me Up is definitely going to disappoint you. The (abovementioned) limitations are numerous, and could greatly affect the overall experience while there.

However, if you want to lower your expectations, this place isn’t at all bad (even if I’d have to say that no one should lower their expectations, particularly when you’re paying good money…).

In the end, at least for people who like (if not love) everything Thai, this is a good attempt. They ought to do better, definitely; but that there’s this choice now ought to count for something…